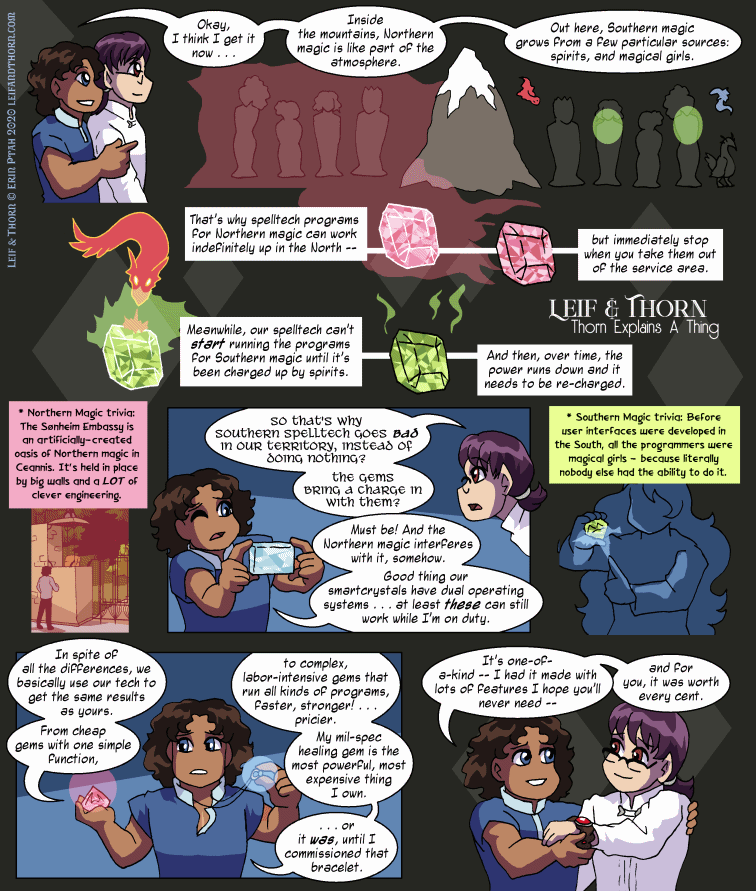 Thorn: Okay, I think I get it now . . . Inside the mountains, Northern magic is like part of the atmosphere.

That’s why spelltech programs for Northern magic can work indefinitely up in the North — but immediately stop when you take them out of the service area.

Meanwhile, our spelltech can’t start running the programs for Southern magic until it’s been charged up by spirits.

And then, over time, the power runs down and it needs to be re-charged.

Northern Magic trivia: The Sønheim Embassy is an artificially-created oasis of Northern magic in Ceannis. It’s held in place by big walls and a LOT of clever engineering.

Leif: So that’s why Southern spelltech goes bad in our territory, instead of doing nothing? The gems bring a charge in with them?

Thorn: Must be! And the Northern magic interferes with it, somehow. Good thing our smartcrystals have dual operating systems . . . at least these can still work while I’m on duty.

Southern Magic trivia: Before user interfaces were developed in the South, all the programmers were magical girls – because literally nobody else had the ability to do it.

Thorn: In spite of all the differences, we basically use our tech to get the same results as yours. From cheap gems with one simple function, to complex, labor-intensive gems that run all kinds of programs, faster, stronger! . . . pricier.

My mil-spec healing gem is the most powerful, most expensive thing I own. . . . or it was, until I commissioned that bracelet.

It’s one-of-a-kind — I had it made with lots of features I hope you’ll never need — and for you, it was worth every cent.

Leif will need every one of those features.

… dual operating systems smartcrystals must be less dual-operation system and more something like when you write code which can run under two different programming languages at once due to clever use of comments, strings and unreachable code. Or, well, program capable of running on two processors.

Leave a Reply to Some Ed Cancel reply