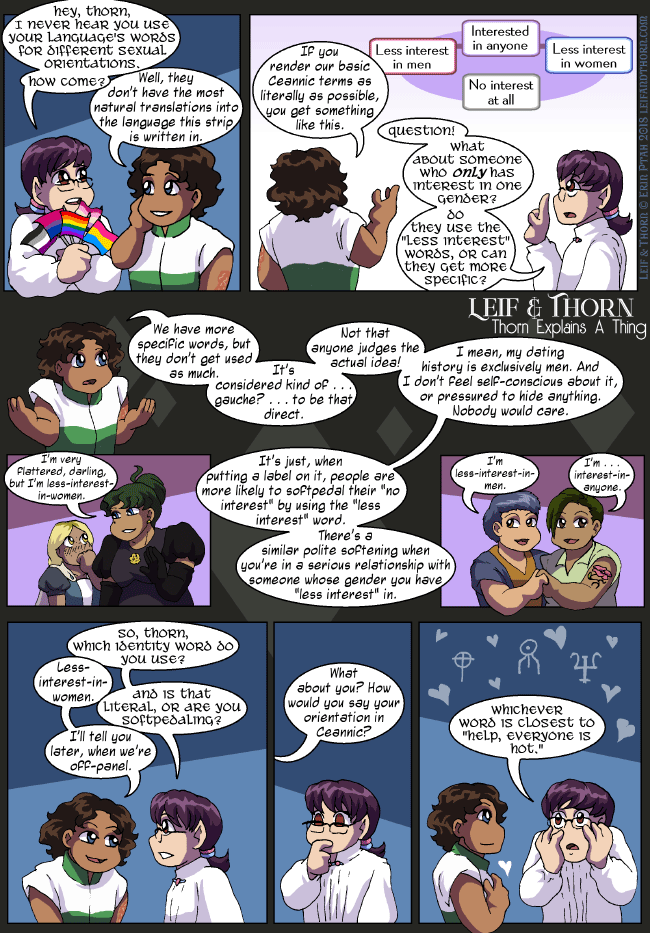 In honor of Bisexual Visibility Day, I bring you this strip about how the Ceannic language is totally bi-as-default.

That last panel features the in-universe biological-sex symbols, as established in this strip.

Leif: Hey, Thorn, I never hear you use your language’s words for different sexual orientations. How come?

Thorn: Well, they don’t have the most natural translations into the language this strip is written in.

Leif: Question! What about someone who only has interest in one gender? Do they use the “less interest” words, or can they get more specific?

Not that anyone judges the actual idea! I mean, my dating history is exclusively men. And I don’t feel self-conscious about it, or pressured to hide anything. Nobody would care.

It’s just, when putting a label on it, people are more likely to softpedal their “no interest” by using the “less interest” word.

Thorn: There’s a similar polite softening when you’re in a serious relationship with someone whose gender you have “less interest” in.

Leif: So, Thorn, which identity word do you use?

Leif: And is that literal, or are you softpedaling?

What about you? How would you say your orientation in Ceannic?

Leif: Whichever word is closest to “Help, everyone is hot.”

Huh. I’d kind of always figured we were on Alternia rules.

What rules are those?

I’m guessing Raen is talking about Homestuck “Trolls”. IIRC, they had zero concept shame over heterosexual or homosexual relationships, partially because they are semi-insectoid and both ‘love’ and ‘hate’ relationships between any two members of the species, male or female, can create the necessary bonds to trigger production of whatever genetic material is produced, combined and delivered to the ‘mother grub’ who produces the infant children. The trade-off is societally, if you don’t have both a Matespirit (Love) AND a Kismesis (Hate) when the time comes to contribute to the continuation of the species… you’re executed.

I apologize if I’ve explained poorly, it’s been literally years since I read Homestuck.

Weird alien biology aside, the trolls’ idea of sexual orientation is “bisexuality is the norm, and having an exclusive preference is treated like a kink.” Like, some trolls kink on bondage, other trolls kink on ladies.

So…different from Ceannis, but not hugely different.

Frankly, IRL… bisexuality is the norm with all animals and all pre-introduction-of-the-concept-of-mono-sexuality humans

Personally, I take great pleasure, by the way, in mocking monosexuals of all orientations online. XD

Oh, c’mon, don’t be like that. The straights can’t help it, and us gays deal with enough garbage already.

Awwww, D is less-interested-in-ladies. Sad. On the other hand, I’m with Leif: “Help, everyone is hot!”

What about people who are cross-oriented? Like I’m bisexual, but homoromantic. And how being ace does not automatically mean being aro and vice-versa. How do they specify for that?

You’d use the word for “more interested in [your gender].” Ace people would use the word for the gender(s) they’re romantically interested in, same with aro people and sexual interest. People will hash out the specific details when they’re in the process of getting involved with each other, same as they’d hash out details like “what are your kinks” and “who tops.”

“Help everyone is hot” could mean omnisexual or Pansexual, like me :3