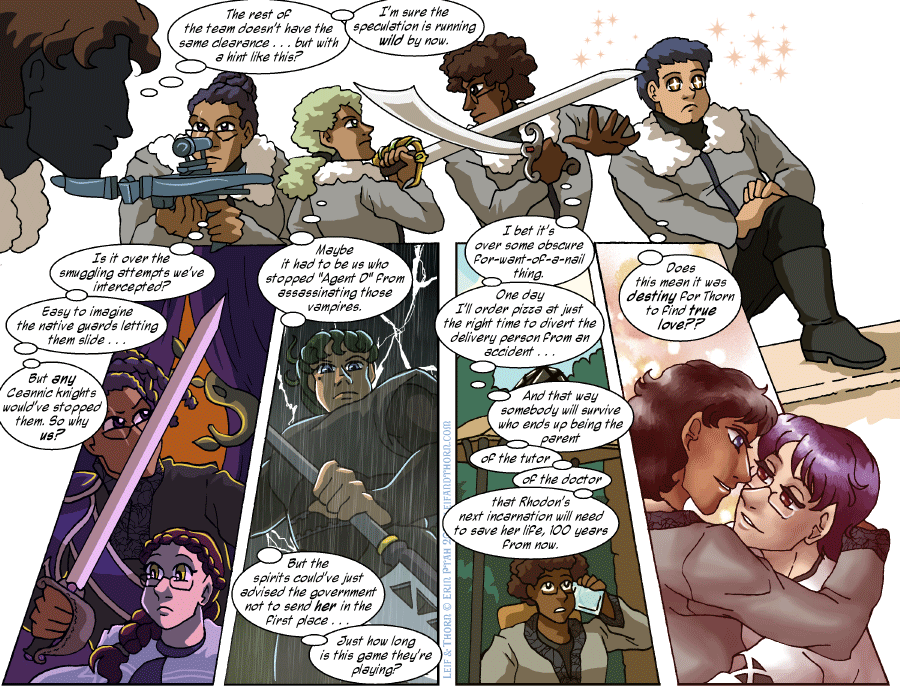 Thorn (thinking): The rest of the team doesn’t have the same clearance . . . but with a hint like this? I’m sure the speculation is running wild by now.

Violet (thinking): Is it over the smuggling attempts we’ve intercepted? Easy to imagine the native guards letting them slide . . . But any Ceannic knights would’ve stopped them. So why us?

Juniper (thinking): Maybe it had to be us who stopped “Agent D” from assassinating those vampires. But the spirits could’ve just advised the government not to send her in the first place . . . Just how long is this game they’re playing?

Rowan (thinking): I bet it’s over some obscure for-want-of-a-nail thing.

One day I’ll order pizza at just the right time to divert the delivery person from an accident . . .

And that way somebody will survive who ends up being the parent of the tutor of the doctor that Rhodon’s next incarnation will need to save her life, 100 years from now.

Birch (thinking): Does this mean it was destiny for Thorn to find true love??

1: Love the design of the crossbow, just honestly loving it.

2: The RSO must be BLIND if he’s not giving those two the business right now.

Well this is definitely one of my favourite pages

Ohh, I love this page.

I would totally come at this from Rowan’s perspective, if I learned that prophecy existed about my work team – though with the context of the comic as a whole, I suspect Birch is the closest to correct…

Rowan’ perspective on the prophecy reminds me of Rhodey’s perspective on Kudzu.
https://leifandthorn.com/comic/the-show-must-grow-on-intermission-9-21/
It’s not exactly the same but the kind of thinking around the corner seems to run in the family.

It’s not just the characters, it’s the readers as well, from what I’ve seen.

(Personally, my theory is that the fire spirits have some degree of awareness and thus the prophecy is along the lines of “have them here because that’s the plot”, but I have a very meta way of thinking, so…)

Readers have much more indicia. Granted, some of that might be just red herrings which will only send us on even wilder speculations …. but we know that Katya is planning something which may be quite big … and maybe end even bigger than SHE expect, and Leif will be important, his PARENTS will be involved and due to his relationship with Thorn the team will be dragged into it and ensure it will end well, and by well I don’t mean well for Sønheim.

However, regarding the fire spirits having 4th wall seeing powers, of course they do. There are already the familiars having such powers, why shouldn’t the fire spirits? It’s even possible their powers extend to our world and they are PREDICTING plot points Erin is going to make in future.

And now I’m wondering if the inside of Birch’s head always looks like a shoujo manga, or only when he thinks about those two. :p

… with the Rose Garden being favourite theme, I wonder the same about the majority of readers. Well … actually, it’s not majority, just 42%, but about the readers using it.

For my part, at least, I just really like flowers and pretty things.

I like flowers and pretty things, but not so bright please, so I choose Northern Dims.

Birch’s thought is in a different color, so obviously that’s the right one! /joking (maybe?)

Perhaps not the right one, but certainly the most fabulous one.

Are you also a But I'm A Cat Person reader?