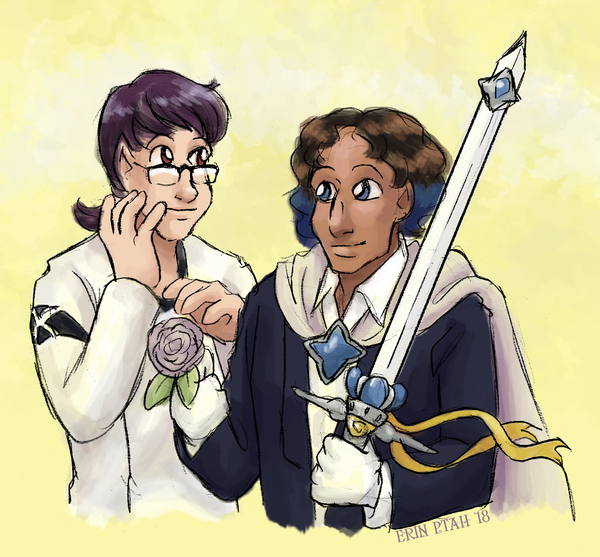 For a “Turn Left” AU prompt on the Leif & Thorn Tumblr: what would’ve happened if Thorn decided to become a mage instead of becoming a knight?

It’s easy for him to take mostly the same path pre-canon. He still feels the same pull toward national service. Ends up on the dragon mission as team mage, rather than team captain; kills the dragon with a desperate water attack instead of a desperate heartsword stab.

When they get assigned to the Embassy, he always has to remember to grab a weapon from hammerspace before entering the grounds, because he can’t cast new spells inside. Leif thinks his uniform is very dashing. Even if the cape is a bit much.

He’s able to help directly with the attack on the National Aquarium. Claps the power-blocking cuffs on Laceleaf’s stalker himself. When they walk into the diner that night and all he can smell is burning meat, he doesn’t pull a weapon – instead, the whole room turns into a splash zone.

When night falls on Summerfest, he puts magical dampers on the compulsions on Leif’s microchip, and they kiss under the fireworks. They have sex on their next date. Any time they’re in Thorn’s apartment, the recording device picks up nothing but ocean sounds, leaving Embassy tech support trying to make discreet inquiries about whether that’s just how mages’ apartments work.

Leif quietly despairs of one day getting sold back to Sønheim. After all, Thorn could quit the army (and why not, it’s not that great in the first place, it’s hardly the Sønska army), but he can’t quit his connection to Southern magic – which is the one thing that isn’t just as good, if not better, up North.

When [ spoiler ] happens at the performance of Leachtric, he’s able to help directly here too. Kale still asks him for the same favor, but as an exercise of authority, not an end-run around it.

Everything goes smoothly until [ spoiler ], which isn’t going to happen for like 8-12 more story arcs, and whoo boy. If canon Thorn is an active magical, it prompts the Embassy to revise his projected threat level from “manageable” to “oh stars get him as far away as possible and take out a restraining order and pack Leif back off to Sønheim so they can ensure that his safety is contingent on Thorn’s behavior.”

(They also consider just giving him Leif, hoping it’ll take away all his motivation to make trouble, but that’s not how Sønheim operates. Besides, it would make the rest of the plot much too easy.)

Art:
on Deviantart | on Tumblr

At least we’ll know what goes into that first one before the year is out, hopefully?

Ohh yes. First set of spoilers will completely unfold once we get into Act II.

… could Thorn be BOTH mage and knight? I mean, could he be mage and still have a heartsword, because I suppose he needs to choose what to train more.

We do know that mages are selected at a relatively young age. Thorn himself had enough water-talent to qualify, but chose to go to the sword. ( Hence the Turn Left AU above. )

I think I remember there being a Mage who ALSO could draw a heartsword, but the heartsword’s main advantage is it can cut through anything other than Magic and other Heartswords.

You can unspoiler some of this now.

Nope because people like me who find the comic later would read the non-redacted version too soon.