Thorn: Not to clear you or Northwind of any responsibility, but . . . I am surprised and disturbed that it took the government so long to catch this.

Kale: Are you? How long does it usually take them to catch someone like me?

Kale: Yeah. That’s what I thought.

Thorn: Although I might be a little fuzzy on the timeline — at the time this made the news, I was in the burn ward.

Kale: . . . huh. Um, when I was caught, I’d been working for Northwind for over five years. If it helps, the Ceannic government was on to me for at least two.

The man I eventually found out was the agent observing me . . . A few months after Calyx got a rabbit, he was the new vet.

That is a really cute rabbit.

Depending on the evidence available, this can scan. Either Northwind’s higher ups got cocky or Ceannic bookkeepers take a while.

I think it’s very important to remember to take fiction with a grain of salt. Erin is a great writer who obviously does a lot of research, but fictional stories cannot be directly translated to real life procedures with 100% accuracy. There will always be human error, or some little bit of “ah, a wizard did it” to fill in some unspoken gap the author hasn’t fully accounted for. Skepticism is all well and good when mystery and subterfuge are involved, but remember that sometimes a cigar is just a cigar, and the mysterious little niggle of a potential plot hole might just be a “whoops, forgot to take that into account.” I’m not saying to stop or slow down or agree with everything the characters say, but it is a good idea to keep in mind.

As opposed to…all the real-world examples of *fast* government investigations into fraud and corruption?

I have no other investigation in Ceannis to compare this one to, I’m giving the benefit of the doubt to them and presuming that they move faster in cases of corporate cases compared to us.

“I don’t think there’s ever been anyone like you”

… Really? That doesn’t seem likely. I mean, how long have magical girls been given the power to manipulate minds? There’s no indication that this is an unprecedented power. And if it’s been accessible to magical girls for generations, surely some would have abused it by now?

Also, while not completely unprecedented, magical girls with this level of power would likely be rare. Remember how far he got with little to no formal training … maybe he’s on similar level as Ivy Muscade.

Mind-control isn’t unique to Kudzu, but it isn’t something that all magical girls can do, either. So it’s partly that he had an aptitude for it in the first place, and partly that he got so much practice at it — and was specifically encouraged to exercise it in abusive ways. All while Northwind worked overtime to isolate him from any consequences (social, legal, or moral) that could’ve made him check himself.

Waaaait… Is that the winged rabbit of awkward compromises from the WtNV fic? A skvader? 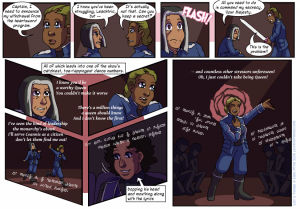